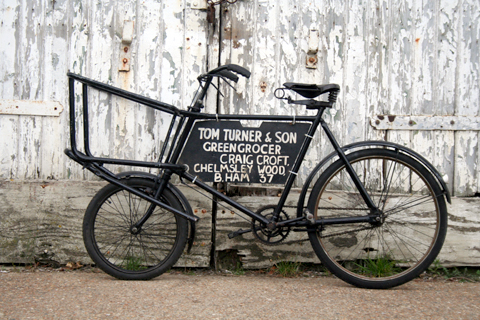 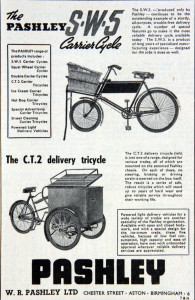 As a teenager I was impressed by the size and shape of beautiful black ‘Grocers’ Bikes’. Not the bikes used by postmen with their minimal bag-carrying superstructure, nor ‘Butchers’ Bikes’ with equal sized wheels and substantial but shallow trays good for a few parcels of sausages etc. What I liked was the sheer splendour of the heavyweight Grocers’ Bike designed to carry a hundredweight of spuds forging ahead of the rider at all times no matter which way the small front wheel was heading.

I found my dream when I was buying an old car. There, propped in the garage, was a majestic sight, branded with a brass badge on the head tube “The Carry-a-Ton” was my perfect steed. Not that I had anything particular to carry, though I did fantasise about French onion selling, it turned out I didn’t suit a beret for starters. What should I be doing for a living?
At this time I didn’t know what to do with my life. I had given up on my teacher training and was disenchanted with my lot. This was despite being lucky enough to have a lovely girlfriend with whom I shared an attic bedsit in Withington. Life was good in many ways but I needed a change.

I saw a job ‘Drillers Mate’ advertised in the Evening News. The job involved travelling around the country, working all hours God sends and sleeping six to a room with complete strangers, mostly ex coal-miners – what on earth was I thinking? I don’t recall discussing this decision with Mary, I said I was going to try out this new venture – but crucially I declared myself to be a ‘free lover’, that I might meet up with girls when away, fat chance, and that she should not feel tied to me. Of course I didn’t really mean this, though in retrospect I guess I was saying I wasn’t ready to ‘settle down’ as they say.

I had a number of friends. Life was dedicated to surviving mostly on the dole, drink, drugs, music and hopefully sex though that usually transmuted into more drink and drugs. I was a passive cog in a wide community seemingly more actively engaged in one or all of these activities than I was. Certainly on the drugs front most of my comrades smoked more heavily and indulged in a wider variety of substances than I did, here I single out poor Andy who had lost most of his teeth to reflux caused by dropping any pill or powder he could get his hands on. A closer friend was Terry, a bright spark without formal qualifications who never held down a job after leaving Till & Whitehead aged seventeen fifty two years ago.

And it came to pass that I caught the train to Farnworth, joining the minibus at Universal Anchorages before heading down to Norwich. The job was demanding physically involving four foot Stilson wrenches and multiple drill tubes, I was in no position to do anything but booze for the evening before sleeping in a single bed to rise far too early for the next long day. By the end of three weeks I was ready to come home on leave, feeling sort of heroic and knackered.

When I arrived home Mary, who was my girlfriend sort of, appraised me of goings on. Another friend, Ron, had come over from Leeds to visit. He and Terry were both more up for action than myself, having a much more uninhibited attitude to potential experiences. For example in exploring LSD it seemed to me that they were more cavalier and admirably devil-may-care. Still I was surprised to hear that they had shared more than Lysergic Acid Diethylamide, they had also ventured into the world of troilism with Mary as guide and companion. This was difficult news for me to digest, mostly because I was so envious of the event yet couldn’t possibly indulge.
Mary had other news for me which I found more difficult to take, though I couldn’t show this to be the case. Andy, the hapless helpless amphetamine addict, had ‘borrowed’ my Carry-a-Ton and it was ‘stolen’ in Withington Village. I suspect he had flogged it, though one shouldn’t speak ill of the dead.

Moral: Don’t leave your partner and your bike in the same place.