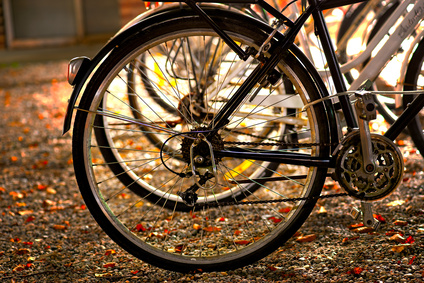 I was 16 when I got my first road bike. It was a blue Dawes with drop handlebars and the frame was a bit big for me. My parents had scrimped and saved to buy it and I was so proud. For years I had managed with borrowed bikes and rusty hand me downs, but this one was the business!

We lived at the top of a steep hill and on one of my first outings on the bike I lost control of it. I’m not sure how, I ended up on the pavement and couldn’t brake quickly enough as it accelerated down the hill. In my panic I aimed it at a lamppost and it hit it head on. I came off the saddle and landed on the crossbar, crushing my crackerjacks and causing waves of hideous pain to course from my groin into my abdomen.

But it wasn’t me that was the most damaged. My pristine bike was now a sorry sight. The front wheel was buckled and, worst of all, the frame and front forks were so badly bent that the frame obstructed the wheel. The bike was un-ride-able. I carried the bent bike home and presented it to Dad. He swore. Quite a lot. My mum turned up and told him not to swear. So he swore some more. The words idiot and ungrateful were used quite a lot. I got a bit upset and nursed my sore nads. I took the front wheel off. The frame was well and truly bent. The whole situation was a disaster.

Suddenly dad grabbed hold of the front forks of the bike, braced himself against he pedals and pulled as hard as he could. He went red in the face. He swore some more, but at the bike rather than me. He pulled and pulled. Veins stood out on his arms and his forehead. He pulled and pulled and pulled. His arms quivered. Then, like a bowstring being released, he abruptly let go. Had anything happened? Had anything moved? We put the wheel back on and – fantastically – it now cleared the frame. Just. The frame was still bent, but the bike was ride-able once more. Dad strutted around a bit, looking rather pleased with himself. He was a true Dad. An invincible Dad. A strong Dad. More importantly I was forgiven.

I got a paper-round after that. I would zoom about south east London on my slightly bent bike and finally saved up enough to get another unbent bike.