We are casting for the part of Old Helbert in our upcoming production of Meal One, our new immersive studio show for families.

We are looking for:

Meal One is an adaptation of Ivor Cutler’s iconic 1970s children’s book of the same name. The show is a co-production with Mind the Gap Theatre and is the tale of a boy, his mother, a plum tree and an extraordinary start to the day.

It will be immersive, highly visual and part-sung, with a mix of live and recorded music composed by Felix Cross MBE. The production will be directed by Alan Dix, Artistic Director of 509 Arts, and performed by a cast of three: 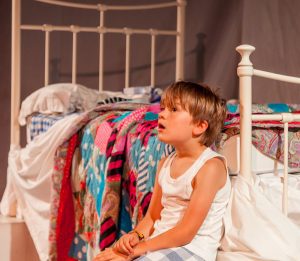 This casting call is for Old Helbert and we are looking for a strong all-round performer who is confident working in an informal studio environment. A substantial part of the narrative is sung, often as a duet between the two Helberts – tenor and boy soprano. The successful candidate will be a confident singer, able to play keyboards. He will be required to interactwith the audience, sometimes acting as guide and narrator.

The production will be approximately 30 minutes long and will be performed in an immersive environment where the audience will beencouraged to explore and discover the space before the main part of the performance starts. It will be performed as a cycle at set times over a two or three day period, with a maximum of four performances a day.

Rehearsal and production will in two stages:

Stage One: Two weeks from 14th to 27th June 2021 at Mind the Gap Studios in Bradford, culminating in a work in progress performance.

We are currently looking for partners to book a similar cycle of shows intwo other venues which will extend the contract to five weeks. The length of this section of the contract is currently to be confirmed.

The audience size will be up to 30 and will need to meet any current social distancing requirements.

509 Arts and Mind the Gap are committed to diverse casting and welcome applications from performers of all ethnicities, backgrounds and life experiences.

Terms: This is a paid role at above ITC rates (£600 per week) plus accommodation and expenses.

Please send a CV, photo and audio or video recording of a song by Tuesday 6 April to Jenny Harris at jenny.harris@509arts.co.uk

Applications selected for audition will be contacted shortly after this date.

Application:
Please send a CV, photo and recording of a song (audio or video) by Tuesday 6 April to Jenny Harris at jenny.harris@509arts.co.uk.
Applications selected for audition will be contacted shortly after this date.