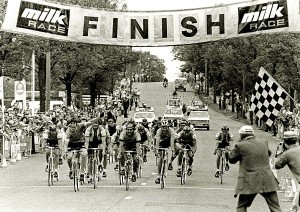 Le Tour comes to Hebden Bridge in 2014. For some people the lasting impact could be for life….

It was a sunny Saturday morning in June of 1975 when I boarded the Old Town bus with my uncle and set off to watch the Milk Race Tour of Britain pass through Pecket Well, following the reverse of the route being taken by Le Tour in 2014. At that time parts of Keighley Road were still cobbled and for the riders it must have been a jarring climb out of Hebden Bridge up to Cock Hill and Oxenhope Moor. The race was preceded by a small entourage – hardly a ‘publicity caravan’ – but somewhere I still have the race programme and a ‘direction arrow’ taken from a lamp post as a souvenir. The leading riders passed in a colourful, whirring flash, followed by the stragglers grinding up through the village and out onto the moor, pain etched on their faces. I remember thinking at the time that there must be a lot of Asian racers as they were so brown. Everybody I knew in Hebden Bridge was pale and white!

I was 10 years old and I was hooked. That summer I set about restoring my dad’s 1950s Rudge Whitworth Roadster, a 3 speed ‘sit up and beg’ that was (and still is) way too big for me. I scrubbed off the rust with wire wool and covered anything that moved in 3 in 1 oil. I borrowed a book on cycling from the library and learned how to adjust the Sturmey Archer 3 speed and set up the brakes. It was so big that I couldn’t stop without falling off unless there was a kerb to put my foot on.

That summer, with all the other kids in the street, I spent ages, sometimes racing, sometimes just pedalling and talking, hanging out on bikes.

By the following summer I had grown a bit and I regularly managed to propel ‘the Beast’ up through Lee Wood and onto Blake Dean and occasionally, by standing on alternate pedals, I could zig-zag up the hill to Widdop. The bike was not without its troubles however, I quickly discovered that the handlebar grips would fly off in your hands when pulling hard up a steep hill. It takes a special talent to fall off going uphill!

The long steady climb up Cragg Vale and over Blackstone Edge to Hollingworth Lake, our local ‘seaside’ resort, became a regular circuit, sometimes with friends, often alone. The frequent demolition of mills and other old buildings also made great venues for off-road racing and trials, and when the shops on Bridge Gate were demolished our race track included the river!

The old roadster was slow, cumbersome and hard work. I saved up my paper round money, birthday and Christmas money for over a year and bought a shiny new 10 speed Raleigh racer, in professional team colours, from Dougie Mansfield’s in Mytholmroyd. I still remember the excitement of that day, it was a sunny April morning when my dad drove me down to collect it – I rode it back of course!

This bike transformed my cycling. I was able to match the speed of the local racers when I rode up Cragg Vale (usually in my football kit or jeans tucked in my socks!), and I was able to go further, to Haworth, Trawden and eventually into the Dales or to Blackpool. In 1980 I joined the local cycling club and became a ‘racer’ myself, joining the Condor Road Club and making friends with others beguiled by this obscure sport. In that year Joop Zoetemelk won the Tour de France on a Raleigh, the exact colours of my own machine. Riding up Cock Hill or Cragg Vale, we would pretend to be in breakaways, sprinting for the summit prize and the ‘Hebden Bridge’ prime. However, because the club was Halifax based, a ride in the Dales often ended with a lonely climb over the hill out of Oxenhope for me.

I was forever tinkering and upgrading parts, as every cyclist does, and Dougie Mansfield’s bike shop became a second home as he indulged my requests to borrow tools and fit the latest new parts. One day he showed me a ‘lightweight’ proper racing bike that had been traded in. I could have it for a bargain price. This was another step up the ladder – the legendary Reynolds 531 frame as used by nearly all Tour de France winners, and lightweight Mavic rims with ‘tubular’ racing tyres. This bike was fast, and like a kid with a sports car I couldn’t always handle it, resulting in a terminal encounter with a garden wall at the bottom of John Naylor Lane in Luddenden Foot at the end of a particularly speedy descent!

The staff at Calder High school were not particularly impressed by my cycling antics. I bunked off to watch every time the Milk Race passed nearby, and I was spotted training up and down the valley most evenings when I should have been doing homework. I managed to scrape through O levels, A levels and a Degree, but cycling was always there as a constant in my life. It is a sport, a way to see the countryside, and a form of therapy, just turning the pedals and letting your mind wander. I have never grown out of it.

My obsession refused to leave me when I got a job, and I ended up importing cycling books and videos, then working in a bike shop, and then training children to cycle and coaching cycle racing skills. Living and working in cities brought different challenges and I became a cycle campaigner, trying to improve facilities for cycling, which eventually led to my present career as a consultant specialising in planning for cycling. This work has taken me all over the world and enabled me to meet many of those Tour de France and Milk Race heroes of my childhood who are also now working to promote cycling.

It is so exciting that the Tour de France will be coming to Hebden Bridge, beyond my wildest childhood dreams, and inspiring a new generation to ride a bike and explore our beautiful hills.