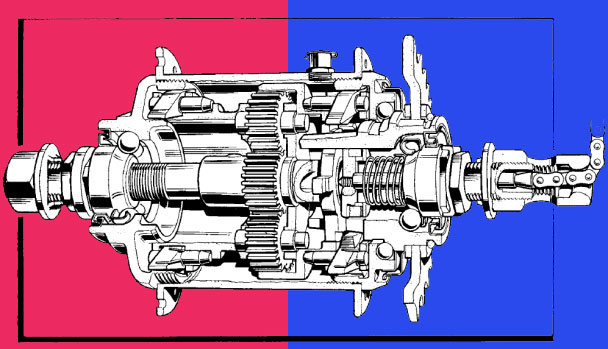 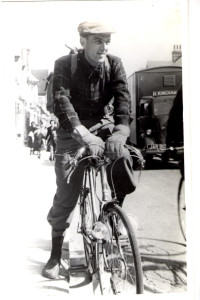 Dad on his bike

On my first day at Camberwell School of Art and Crafts I arrived slightly hot and bothered; it was a warm September day and I had just cycled through five miles of South London streets with my oversized drawing board under one arm and an A-Z stuffed in my waistband.

The bicycle was my father’s, and was also slightly too big, so the board was rammed again and again up into my armpit as I gripped both hands to the handlebars to stop or start. I still have the board, but the bike was stolen in my first year. My dad had owned it for decades – in fact he toured Britain on it in the fifties, writing a series of articles for a cycling magazine as he went. Later, when I was two or three years old, he added a small seat to the crossbar, foot rests below the handlebars, and took me on rides with him. Ever since then, it had been parked in the woodshed, unused – but I distinctly remember my father’s hesitation when I announced my intention to borrow it. It was a drab greyish blue, had a set of three Sturmey Archer gears, and sit up and beg handlebars – so I was surprised anyone had bothered to steal it at all.
My father calmly claimed the insurance and bought me a brand new, bright red Raleigh.

So his bike was transformed to mine. It was what we used to call a racing bike, because of the drop handlebars and Derailleur gears, but nowadays I think is called a touring bike. It was much faster, great fun to ride and I soon became a danger to myself and the London traffic on it. At the end of my four years at art school I counted up at least ten accidents due to taking corners too fast, ice or oil on the road, cars pulling out in front of me, rain affecting the brakes, or not looking where I was going. I had replaced the front forks (twisted going too fast round the Vauxhall one-way system), added a dynamo for lights, and a carrier to transport my painting equipment. I took it several times on the ferry to Cherbourg, and once on the train to Italy – a famous four week landscape painting holiday near Perugia in 1980 on which I and the bike carried enough canvas for six paintings, eight wooden stretchers, an easel, box of oil paints, two-man tent, stove, sleeping bag and (as far as I can remember) a change of clothes. I hadn’t realised that on the international train, it would travel separately to me – and when it was handed back to me at Pisa, the rear wheel was so buckled I could only ride it by disabling the rear brake.