I got run over by a bus 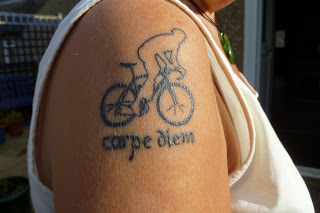 I got run over by a bus outside Rochdale police station.

I was working with M6 Theatre at the time and on my way to meet with the company and drive to the school where we were performing that morning. There was a roundabout ahead and I looked behind me before signalling and pulling out into the right hand lane. I could see a bus, but it was quite far away. I pulled out and carried on to towards the roundabout.

The next thing I knew, there was a loud bang and suddenly I was lying under the bus with my head sticking out looking up the front of it. My bicycle was on top of me. The driver pulled me out – lucky for him and very lucky for me that I didn’t have a spinal injury. He propped me up into a sitting position on the kerb and the air turned blue. I was effing and blinding and shouting at him and all the passengers in the bus were staring at me through the windows. He was mortified.

Apparently, his jacket had been hanging on a hook at the back of the cab and because he had the window open, it kept flying out behind him. He turned round to grab it and stop it from flinging about. He still had his foot on the gas, of course, so he hit me. Not the brightest button in the box, driving whilst you’re looking the wrong way and then dragging an injured person out and sitting her on the kerb. I got several grand in compensation and bought another bike and a crash helmet. I ended up with a tendon transfer and a cartilage removal and now I have osteoarthritis. I still cycle. Walking hurts.